by Better Than The Book 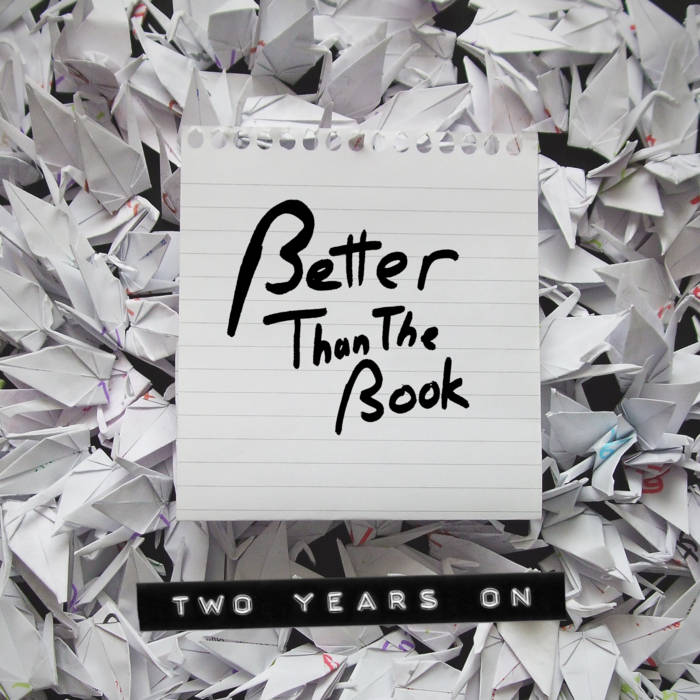 larrynachos An incredibly diverse punk rock album. Each track is so relatable, not to mention a pleasure to listen to! Loved hearing Cyberdevil as well. A must-have for punk rock fans! Favorite track: Make Your Mark.

david klein This album, A follow up to the ‘One Small Step EP’ is a major step up from its predecessor in terms of mastering. If you listen close you can single out each instrument without even trying. That is not the only great part about this album though, as you listen through the album you can hear the love that Nick had put into the album. Be it from tracks such as ‘Hearts Racing’, ‘Head Above Water, or even the samples used.
This album, is a true labor of love and one of my favorite albums I own. Favorite track: Wireless Networks Available.

Vladimir Kuznetsov A very heartfelt and sincere album with songs to comfort and inspire you. It is music for the sake of music, it is a passion to create something incredible, something life-changing, and put one's soul into the vocals, one's life experience into the lyrics, one's energy into instrumentation and the best skills into production. "Two Years On" is about living your life as your heart tells you to, dealing with difficulties, overcoming issues. I keep coming back to this album over and over. Favorite track: Wireless Networks Available.

Better Than The Book - Two Years On

I think the album itself speaks more than I could explain in a few words here, but I'd like to share some kind words which mean a great deal to me from my colleague and friend Vladimir Kuznetsov:
tinyurl.com/zc7huwy

\\\STOP HERE/// For a spoiler-free experience, please read these credits after enjoying the album!

I’d like to extend some special thanks to a great few people who made this album possible.

Firstly, a huge thanks to Bob Axell for his contributions to “Re: HipHopPunk” and “Head Above Water”. It’s been such a great project to work on together and I’m already looking forward to meeting you in our next collaborative musical endeavour.

Next I’d like to thank my big brother Eamon for always trying to outdo me and giving me something to chase and drive me forward, as well as lending me his Korg MS-20 for the synth leads in “Wireless Networks Available”. I promise you’ll get it back this time, unlike one of your guitar stands ;P

Next, a huge thanks to my beta testing team: Vlad (who also made a fantastic typography pre-release video for the album featuring track 02: “Homecoming”! See it on YouTube here: tinyurl.com/jzazg9r!), Anthony, David, Sam, Roxy, Bob, Eamon and Eva for kindly providing feedback on the album and artwork during its progress and at the end, as well as just being a great bunch of people. This album wouldn’t be half as good without your help.

Another huge thanks goes to Thomas of e-instruments lab for putting all that time and effort in helping me getting some software working on my very old laptop, instead of saying “Time for an upgrade, mate”. Without you there would be no horns, and I can’t thank you enough for making that dream a reality!

Thanks to Andy too, who blasted his vocal chords in the gang vocals of the “One Small Step” EP (and guitar in “Woof Woof, Nag Nag”) without which, this album would have nothing to follow, as well as his general support and distribution suggestions.

Lastly I’d like to say a big thank you to everyone else who’s been a part of my life especially in the last 3 years for inspiring the songs on this album as well as your support. A huge thank you to Eamon again, my parents for putting up with the occasional rumble above the kitchen, my lovely girlfriend Eva who’s really given me the inspiration and strength to follow my dreams and stay strong amidst the struggles as well as for the lovely anniversary presents which helped to make the album art, to my other friends and family for their support, discussion and inspiration, and finally thanks to you who’s reading and listening, without which there would be no-one to hear the music I’ve poured my heart into.

Thank you again to everyone who helped make this album possible! I hope it brings you many hours of listening pleasure.

Sample Credits (All attribution is courtesy, not obligatory by law):

09 - Re: HipHopPunk
“Cathode Ray Days” - Better Than The Book

*While the Amen Break is part of musical culture now and its copyright is grey, I want to say a big thanks to The Winstons for their contribution to music and give them the credit they deserve. I’ve put in my contribution and encourage others to do the same here: www.gofundme.com/amenbrother2

Better Than The Book and Nick Standing are not endorsed by any of the organisations, bands or people mentioned in the above Sample Credits (Apart from obviously Better The The Book)

Better Than The Book is Nick Standing, AKA Jabun and anything he can find in the moment to create his beloved Ska Punk project. Feel free to keep up with his other musical endeavours and adventures on the JabunAudio Website, Facebook and Twitter.
jabunaudio.weebly.com
www.facebook.com/JabunAudio/
twitter.com/HurpADervish

Copyright Better Than The Book 2016

Better Than The Book! A musical project by Nick Standing AKA Jabun. Heartfelt and high energy Ska / Pop Punk slices of life from a guy born in the 90s.

Better Than The Book recommends:

Bandcamp Daily  your guide to the world of Bandcamp

Benji B talks about his new compilation ‘Deviation Classics’